After three years of homelessness, Joe’s moved into his own place 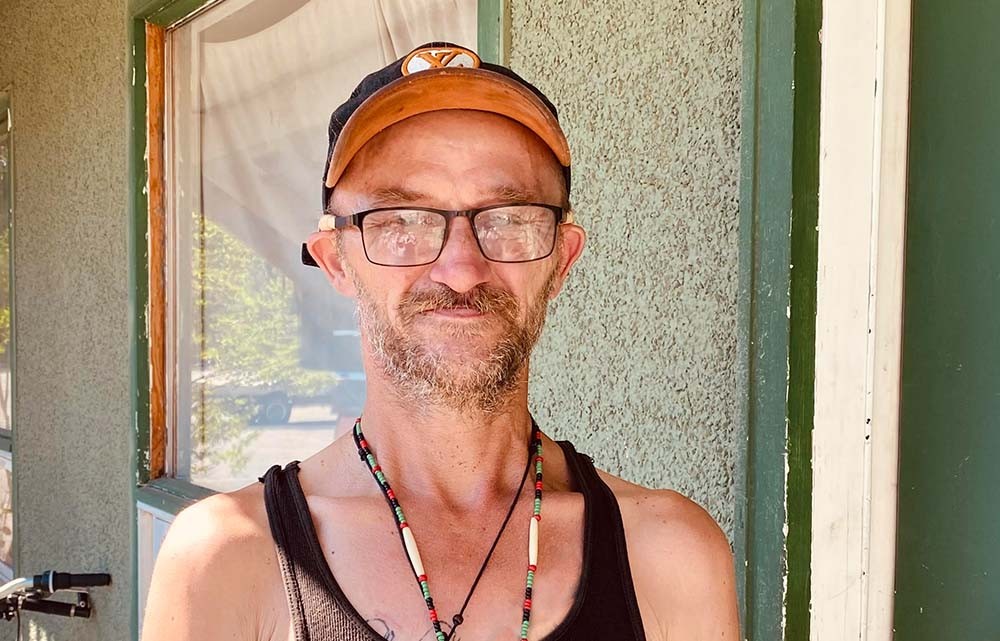 Quesnel - portrait of Joe
Portrait photo of a white, middle-aged man standing outside a home wearing glasses and a cap

For Homelessness Action Week (Oct. 9-16, 2022), we’re highlighting stories about the pathways in and out of homelessness. There are as many ways to become homeless as there are people without a home. Follow us this week on our social media channels and find out more about the many paths to tackling homelessness and housing affordability.

Joe lived at the Quesnel Shelter and Support Society (QSSS) for a while.

More than anything, the soft-spoken, middle-aged father of four wanted a home. A place his kids can visit.

“I just want to have my children under one roof. They keep me going, every day. I just want to be with them”, says Joe, his voice catching.

Quesnel is Joe’s hometown. He grew up, got married and had a family here.

The small, northern community has about 23,000 residents. It’s just south of Prince George, on unceded lands of the Lhtako Dené territory, in the middle of BC.

Like many communities in BC, and across North America, Quesnel has more people becoming homeless. The 2020 Point-in-Time Quesnel Homeless Count found 121 people living without housing. Most were homeless because they could not afford to stay in their homes.

He was in and out of homelessness for some time before moving to the shelter.

“I had to sleep on a mat in the hallway when I first got here. After a while I was moved to a room. Each room has four beds. It can be smelly and noisy. You do what you need to do,” says Joe.

One day, Joe reached out and asked for help finding housing. Jennie Goodenough, a Homelessness Prevention Program Outreach Worker in Quesnel, met with Joe to see if there was a solution which would work for him.

“There are so many hurdles to finding affordable housing when you have a history of homelessness. To go from nothing into housing. Try finding a rental without access to the internet or a computer. Rentals are advertised on Facebook. Most shelter guests don’t have access to the internet. When they do find a place, they’re competing with working couples. It’s so hard for folks. No phone, no anything, its next to impossible”, explains Jennie.

A passionate advocate, Jennie is fiercely committed to securing housing for those that need it most.

“My folks are used to having doors closed on them. They need a hand. I’m a bit of a bulldog. I won’t stop until they have housing,” says Jennie.

Keeping folks housed is a big part of Jennie’s job. Once they’ve got a home, she gets people settled. Jennie helps with groceries, medical appointments and getting access to government support.

The Canada-BC Housing Benefit provides financial assistance through non-profits to members of marginalized groups with low incomes to help with their monthly rent payments.

This benefit supports people like Joe, on limited incomes. As of June 2022, more than 2500 people were receiving the housing benefit in British Columbia. Other  rental supplement programs offered through BC Housing include the Rental Assistance Program (RAP) and Shelter Aid for Elderly Renters (SAFER).

With Jennie’s help, Joe got his own place. He moved in this summer.

“One day I ask for help finding a place. [Later that day,] I’m moving! Sleeping in my own space without having to protect everything I own. My daughter will be able to come over. We won’t have to meet in the park or a restaurant,” says Joe.

Since 2017, the Province has funded more than 35,000 new homes that have been completed or are underway for people in B.C.

To find out more about Joe’s story and how BC Housing helps people at risk or experiencing homelessness, listen to our podcast.

After three years of homelessness, Joe’s moved into his own place