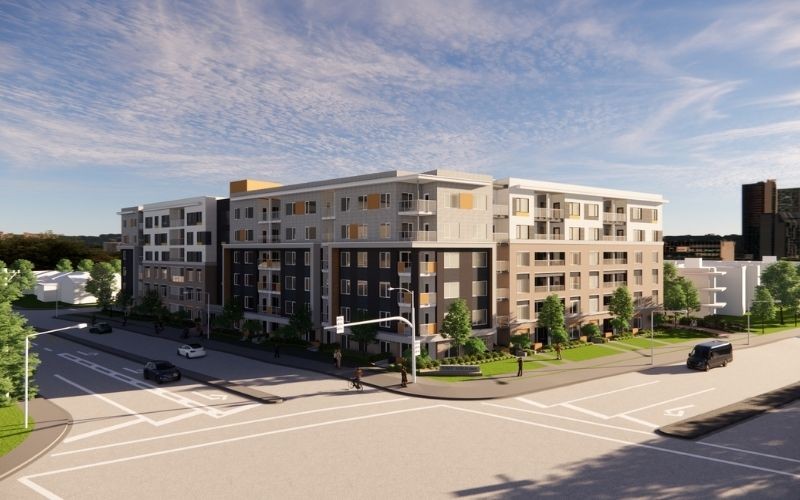 Coquitlam - Robert Nicklin Place
modern six-storey apartment building on the corner of a city block on a bright, clear day.

COQUITLAM - Everyone in Canada deserves a safe and affordable place to call home. The COVID-19 pandemic has made it clear that affordable housing is key to Canada’s recovery, including in communities such as Coquitlam.

Today, the Honourable Ahmed Hussen, Minister of Housing and Diversity and Inclusion, alongside Ron McKinnon, Member of Parliament for Coquitlam – Port Coquitlam, Fin Donnelly, Member of the Legislative Assembly for Coquitlam-Burke Mountain, and Richard Stewart, Mayor of Coquitlam, announced a federal investment of $46.1 million to build Robert Nicklin Place, which will include 164 units of housing, primarily intended for low-income families.

The Province of British Columbia, through BC Housing, is providing nearly $8.1 million through their Building BC: Community Housing Fund to fund 74 of the building’s units, as well as an ongoing annual operating subsidy of approximately $102,000. The City of Coquitlam is providing $3.3 million in capital funding while Metro Vancouver Housing Corporation, Translink, and School District 43 (Coquitlam) are all donating funds towards the construction of Robert Nicklin Place.

The new low-rise apartment building will be located at 3100 Ozada Avenue and will be operated by Affordable Housing Societies. The building will address the urgent need for housing for vulnerable renters in the community of Coquitlam. It is near community amenities such as the Millennium Line Lincoln Station, schools, a childcare centre, neighbourhood parks, a public library, a hospital, and a community centre.

The Honourable Ahmed Hussen, Minister of Housing and Diversity and Inclusion -

“This investment from the Government of Canada’s National Housing Co-investment Fund is improving the economic and social well-being of the families who will soon call Robert Nicklin Place their home and is making Coquitlam a better place to live. When people have a secure and stable home, they gain the confidence they need to succeed and fulfil their potential.”

“We know people in Coquitlam need more options for quality, affordable housing. Our government is proud to be working with the federal government, the City of Coquitlam and local partners to take another step forward in addressing the lack of affordable housing for people with low to moderate incomes and make a significant difference in the lives of people in the community.”

“Coquitlam is so proud to have contributed $3.3 million to this project development through our Affordable Housing Reserve Fund (AHRF). The AHRF is a cornerstone of Coquitlam’s Housing Affordability Strategy and integral to funding much-needed housing projects like this.”

Sav Dhaliwal, Chair of the Metro Vancouver Board of Directors -

“The Affordable Housing Societies is very pleased to be furthering its mission to ‘provide quality, affordable rental homes so that families and individuals can thrive’ through the provision of 164 new rental homes in the new Robert Nicklin Place in Coquitlam. These new homes are part of our Society’s goal to add 1400 new affordable rental homes to our portfolio by 2030. This incredible project has brought together partners from 3 levels of government, and when complete will deliver rental units that will be affordable for a broad range of income levels. We are grateful for the incredible support we have received from the City of Coquitlam, BC Housing, and CMHC, and we look forward to seeing individuals and families move into these new homes in late 2024.”