From Kabul to Surrey, Fazel and his family call Greenbrook home 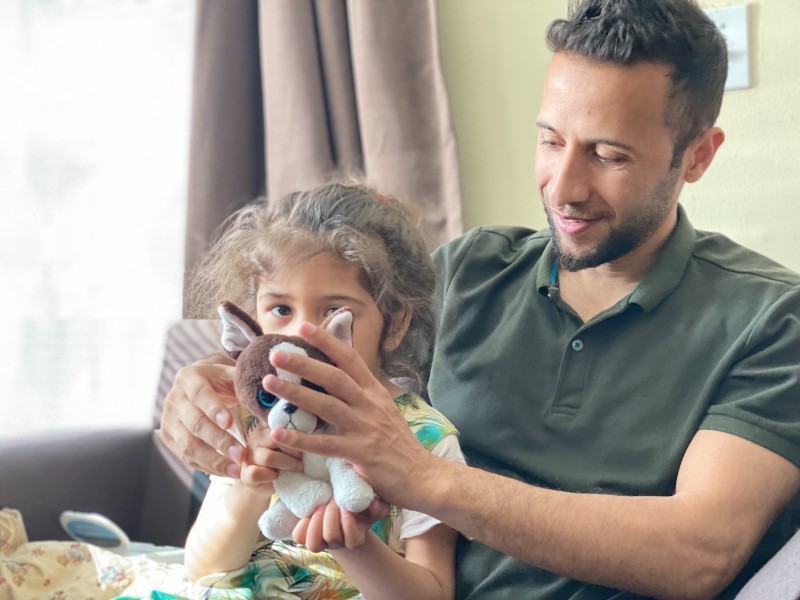 It took three days and nights for the Noorian family of six to escape Afghanistan. They left suddenly, in the middle of the night, with two school-age children, two toddlers and two small bags for their personal papers and a change of clothing.

In the summer of 2021, the Taliban seized control of parts of Afghanistan. Ethnic and religious minorities were tortured and killed. So were former ANDSF soldiers and those seen as government sympathizers. People like Fazel Ahmad Noorian, a former translator for the Canadian military.

Fazel’s eyes fill with tears talking about it. More than 600,000 were fleeing, dangerously packing Kabul Airport. Security people with sticks beat back the crowds. It was so congested in the airport families needed to take care they didn’t lose one another. Fazel was terrified of losing his tiny, youngest daughter.

“I carried her on my shoulders, above the crowd. Then it got so hot. We didn’t have water. She was not well. I knew I had to get us water or we wouldn’t make it,” Fazel says.

A van loaded with bottles of water saved them. Three months later the Noorian family found themselves in BC.

Today, Fazel and his family live in a sun-drenched, three-bedroom townhome in Surrey.  Greenbrook is a BC Housing managed family complex with 127 affordable rental townhomes. The bright living room is calm, worlds away from last summer’s chaos.

Cartoons sing from a TV and two toddlers are curled up on a nearby couch. The youngest, a serious-looking two-year-old boy in a bright red Spiderman shirt, tightly holds his three-year-old sister’s hand. Together, they carefully watch a dancing cartoon bear. Fazel sits nearby, working on his laptop. Every now and then, he absentmindedly strokes a child’s head.

From the kitchen, Mrs. Noorian prepares fruit for a snack. Two older children, twelve and nine, run between the outside yard and the kitchen snack tray. It’s a perfect place to raise kids.

“I didn’t want to live here at first. I’m a banker, I hoped to live and work in downtown Vancouver. But my wife loves it here and now I do too. We can walk to the grocery stores. There are other Muslim families to talk with here. My parents and other family are nearby too,” says Fazel.

It’s a family-friendly community. The two and three-bedroom townhomes are closely set together sharing green spaces dotted with mini-playgrounds. A gentle, winding path weaves through the complex.

Resettling in a new country is huge. It involves learning a new language, managing trauma, securing a home, a job and schooling. To help tenants settle in, BC Housing tenant support workers liaise with resettlement support partners like the Immigrant Services Society of British Columbia (ISSofBC) and MOSAIC.

Since October 2021, BC Housing has housed 13 families from Afghanistan, including 24 adults and 36 children.

Since 2017, the Province has funded more than 32,000 affordable new homes that are recently completed or are underway for people in BC, including more than 1,500 homes in Surrey.

From Kabul to Surrey, Fazel and his family call Greenbrook home