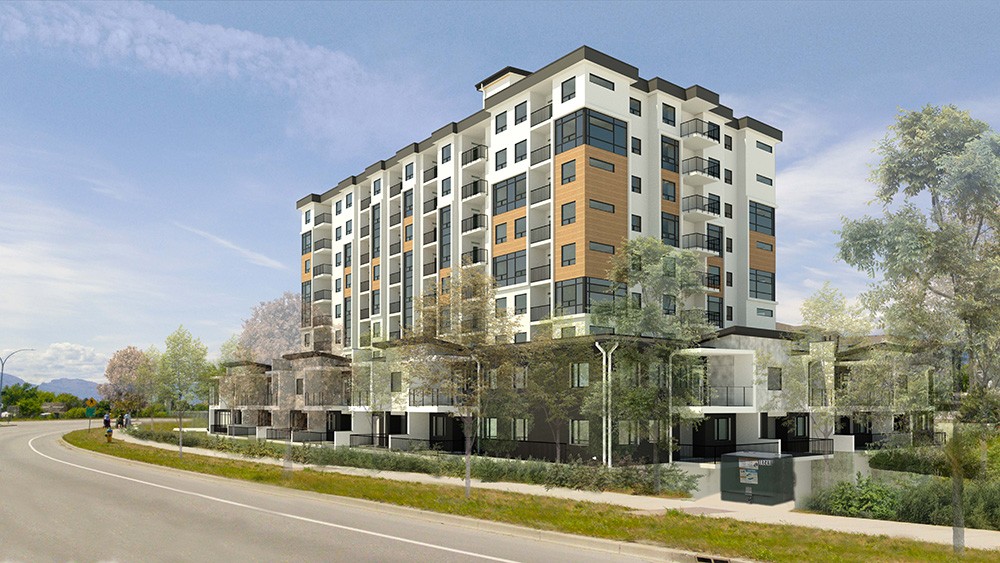 KELOWNA - Construction is underway on 122 affordable, energy-efficient rental homes in the final building of the National Society of Hope's Apple Valley development in Kelowna.

The building will be constructed out of mass timber, which has a much lower carbon footprint than other traditional building methods.

"Projects like this make life more affordable for people and help create a cleaner future for communities," said Harwinder Sandhu, MLA for Vernon-Monashee. "People with a range of incomes will soon have access to 122 comfortable, energy-efficient homes that will bring peace of mind to residents for years to come."

Located at 2175 Benvoulin Rd., the modern nine-storey building will provide a mix of one- and two-bedroom homes for moderate- and low-income individuals, families, seniors and people with disabilities.

All projects primarily funded by BC Housing must meet at least Step 3 of the BC Energy Step Code for residential buildings. The goal for this project is to surpass that requirement by including energy-efficient features, such as triple-glazed windows, central heat recovery ventilators, electric car charging stations and a highly efficient central boiler system.

Named Capstone, the project is a partnership between the provincial and federal governments, the City of Kelowna and the National Society of Hope, which will own and operate the building. The society also owns and operates the three neighbouring buildings that make up the Apple Valley community, which provides 200 homes.

"Capstone completes a 25-year vision of the society to bring well-located affordable homes to the Midtown area of Kelowna," said Philip Lambert, president, National Society of Hope. "Through the generous donation of land by Gordon and Helen Ziglar in the 1990s, the society, in partnership with BC Housing, the City of Kelowna and the Canada Mortgage and Housing Corporation, have been able to develop 322 housing units and beautiful amenity spaces for the tenants."

The new homes are expected to be ready for occupancy in spring 2023.

This project is part of B.C.'s 10-year, $7-billion housing plan. Since 2017, the Province has funded more than 30,000 affordable new homes that have been completed or are underway for people in B.C., including nearly 1,800 homes in Kelowna.

Ahmed Hussen, federal Minister of Housing and Diversity and Inclusion and Minister Responsible for Canada Mortgage and Housing Corporation -

"Every Canadian deserves a safe and affordable place to call home. Our government is proud to be involved in these projects at their earliest stage, in order to ensure that they realize their goal of housing Canadians that need it most. This is one of the ways our government continues to ensure no one is left behind."

"Every Canadian deserves a safe and affordable place to call home. Our government is proud to be involved in these projects at their earliest stage, ensuring that they realize their goal of providing housing to Canadians that need it most. This is one of the ways our government is building more inclusive communities where no one is left behind."

"It's great that the city was able to help reduce the costs of building Capstone, keeping the housing units more affordable. By waiving $300,000 in development fees, the Society of Hope and BC Housing were able to go ahead with another 122 homes for Kelowna residents at a time when we have a serious need for more affordable housing."

A map showing the location of all announced provincially funded housing projects in B.C. is available online: https://www.bchousing.org/projects-partners/Building-BC/homes-for-BC