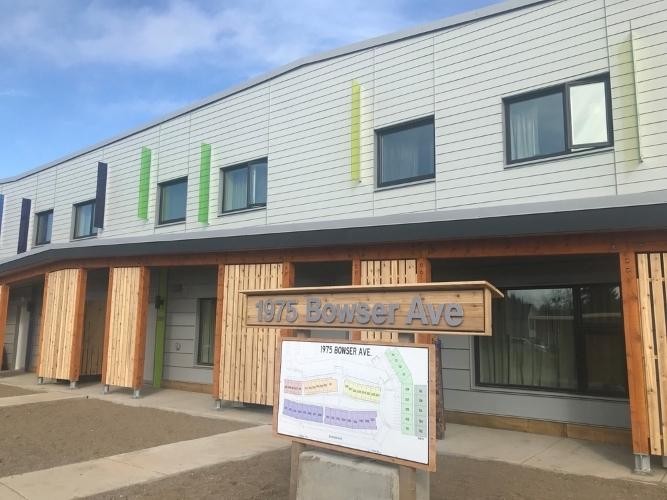 PRINCE GEORGE - Indigenous Elders, families and individuals have begun moving into 50 new affordable homes with the opening of a rental housing development in Prince George.

"There is an urgent need for affordable homes for Indigenous families and individuals in Prince George, and throughout the province," said David Eby, Attorney General and Minister Responsible for Housing. "We're responding by building safe, comfortable homes like this in partnership with Indigenous organizations and governments, but we can't respond to all the demand ourselves. We need the federal government at the very least to match provincial funding so that more Indigenous housing can be built across B.C."

The Province partnered with the Aboriginal Housing Society of Prince George (AHSPG) to build the project at 1919 17th Ave. The development consists of six two- and three-storey wood- frame townhome buildings. AHSPG will own and operate the buildings, which will provide a mix of one-, two-, three- and four-bedroom homes.

"AHSPG is excited that their dream of empowering the community's vulnerable population to a culturally safe and affordable home is coming to life," said Ruby Baptiste, president of the board of directors, AHSPG.

All units have rents geared to income, with households paying no more than 30% of gross annual income toward their rent. The housing is targeted to those with moderate and low incomes.

Residents will be supported through the AHSPG's future nearby community centre and on-site staff that will connect tenants to local services and programming. The location is ideal for seniors and families as public transportation, amenities, schools and commercial services are all located within walking distance.

These new homes comprise the first of a four-phase housing development. The second phase will provide 35 supportive homes for Indigenous Elders and seniors experiencing or at risk of homelessness. These homes are expected to open in summer 2022.

This project is part of B.C.'s 10-year, $7-billion housing plan. Since 2017, the Province has funded more than 32,000 affordable new homes that have been completed or are underway for people in B.C., including approximately 340 in Prince George.

"AHMA would like to acknowledge the dedication and hard work from the entire team at Aboriginal Housing Society project in Prince George. The 50 new affordable homes will make meaningful change in the lives of all future residents and foster a broader sense of community for Indigenous Peoples and the City of Prince George. This new development is an exciting initiative and a wonderful example of how AHMA members are leading the change for Indigenous housing across British Columbia."

"The City of Prince George is thrilled the first phase of this important affordable housing development is now complete and will begin providing quality housing and connections to services for people in such a central location in our community. Council wishes to thank the Province of B.C. and the Aboriginal Housing Society of Prince George for partnering in order to bring this essential building to our city. It will benefit families, seniors and Elders well into the future."