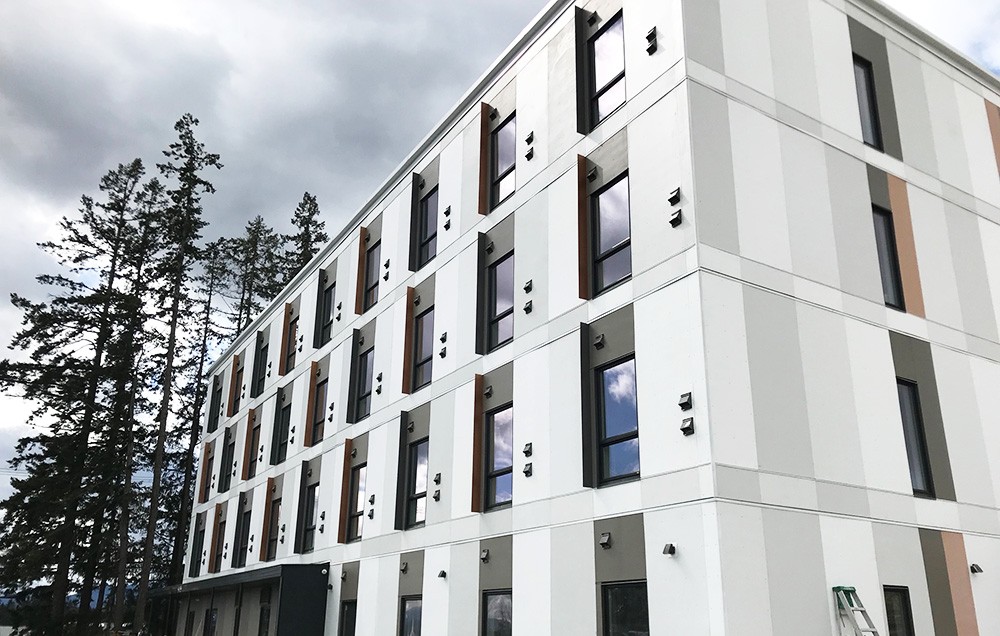 NORTH COWICHAN - People experiencing or at risk of homelessness in North Cowichan will soon move into 52 new safe and secure homes as the community's first supportive housing building opens.

"I'm pleased to see these new homes open as I know they will make a significant difference for people experiencing homelessness in North Cowichan," said Doug Routley, MLA for Nanaimo- North Cowichan. "Many thanks to the Municipality of North Cowichan and Lookout Housing and Health Society for supporting our community and working with the Province to develop solutions that support people in need."

Located at 6428 Paddle Rd., Sq'umul' Shelh Lelum' is a four-storey building with 52 self- contained studio homes, including four units for residents who need an accessible layout. Each room has its own kitchenette and washroom. The building also has a commercial kitchen, dining and lounge areas, storage, laundry and a medical room.

Sq'umul' Shelh Lelum' is one of two new buildings planned for the Cowichan Valley as part of a provincial commitment through BC Housing, the Municipality of North Cowichan, and the City of Duncan to build 100 supportive homes. The second supportive housing building, located at 260 White Rd. in Duncan, is under construction and is expected to open in early 2023.

"This housing is very much needed in North Cowichan, and I am pleased to know 52 people will now have a safe, secure, supported and permanent roof over their heads," said Al Siebring, mayor, Municipality of North Cowichan. "I have long been a proponent of housing solutions with wraparound services, especially for our most vulnerable residents."

Lookout Housing and Health Society, an experienced non-profit housing operator, will operate the building. The society will provide residents with on-site staff and support services, including meal programs, life and employment skills training, health and wellness support services, and opportunities for volunteer work.

"The commitment that the Province, the District of North Cowichan and the City of Duncan have shown in developing these homes for the community has been nothing less than inspiring," said Shayne Williams, CEO, Lookout Housing and Health Society. "Lookout is honoured to be able to support these residents who have been waiting for permanent homes in the Cowichan Valley."

Residents will start moving into their new homes on Monday, April 25, 2022.

This project is part of B.C.'s 10-year, $7-billion housing plan. Since 2017, the Province has funded more than 32,000 affordable new homes for people in B.C. that are complete or underway, including more than 300 homes in the Cowichan Valley.

To learn more about supportive housing coming to the Cowichan Valley, visit: https://news.gov.bc.ca/releases/2020MAH0068-001095

See a map showing the locations of all announced provincially funded housing projects in B.C.: https://www.bchousing.org/homes-for-BC