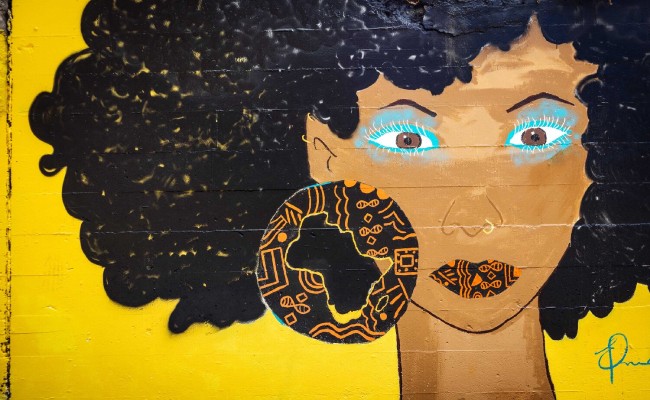 As part of the 2021 Vancouver Mural Festival, BSRP features murals from several Black artists throughout the Strathcona neighbourhood. The area was once a thriving enclave for Vancouver’s Black population before residents were displaced when the Georgia and Dunsmuir viaducts were built in the early 1970’s.

“We know that art is a way of bringing people together and narrating a story of a place specifically in relation to its past, present and future,” said Amina Yasin, Board Director, Hogan’s Alley Society. “This project was very important for us to promote and participate in, as well as support.”

The intercultural representation of the murals is important as it helps bring to light to the historic and ongoing racism towards people of colour. These murals invite us to imagine what our city could become.

“S.U.C.C.E.S.S. is grateful for the opportunity to be a part of the Black Strathcona Resurgence Project by providing a platform to encourage allyship and inclusive communities through the work of local artists,” said Queenie Choo, CEO of S.U.C.C.E.S.S., which manages Solheim Place. “Our hope is to engage the community and promote dialogue surrounding local history and culture.”

Partnerships are critical to BC Housing’s work and none of this would be possible without the close collaboration with S.U.C.C.E.S.S., Hogan’s Alley Society, and Vancouver Mural Festival.

“Community building projects like this help us re-establish historic roots and a sense of belonging that is vital to healthy communities,” said Vincent Tong, BC Housing’s VP, Development and Asset Strategies.