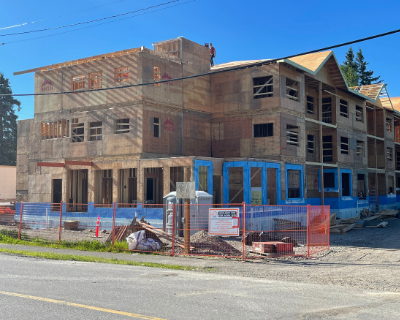 Hammers bang and drills buzz. At a construction site in Vanderhoof, crews construct housing for seniors and people living with dementia.

The 28-unit building, operated by Connexus Community Resources Society, will provide 20 units to seniors and eight to dementia care patients. This living model has not been done in any other public housing in BC.

“This unique housing project will bridge the gap in seniors housing and those who need assisted living in long-term care,” said Tyrell Arnold, Executive Director of Connexus Community Resources Society.

The housing project started when Arnold talked with Dr. Nicole Ebert of St John Hospital. Dr. Ebert told Arnold the hospital usually had six to eight dementia patients who were stuck there because they had no where to go.

Dr. Ebert presented the initiative to the District of Vanderhoof Mayor and Council, who then teamed up with Northern Health and Connexus. They evaluated housing models from other areas in Canada and the UK and settled on a seniors and dementia care model from Nova Scotia.

The project is much needed in Vanderhoof. The Connexus waiting list for housing has grown to around 40 people.

“Some of the increased demand is caused by seniors who are moving from rural areas to urban areas. Others move because of the death of a spouse, while others are seeking to downsize,” Arnold said.

“We already have 10 people who have called us asking to book a home in the new building once it is complete.”

The District of Vanderhoof was also thinking about how to address some of the housing challenges facing their community. When the project was presented to the Mayor and council, they quickly came on board and donated land, located on 2657 Church Ave.

“Many seniors ended up staying in our local hospital for over two years because we did not have housing for them,” said Gerry Thiessen, Mayor of Vanderhoof.

“Northern Health did some research and found the unique housing for seniors and for people living with dementia. We then talked to BC Housing who provided their funding support and we supported Connexus Community Resources Society to be the operator.”

Thiessen added that the project will bring stability to families who care for elderly parents. The housing will also bring dignity to the seniors as they will have their own self-contained homes in their community.

The construction project has also been good to the local economy, Thiessen said.

“Some local tradespeople have found jobs working for the project, local businesses have found contracts and local motels are providing accommodation to nonlocal workers.”

Thiessen thanked BC Housing, Northern Health, and Connexus for collaborating with the District of Vanderhoof on this seniors and dementia care housing project.

“Northern Health is happy to be working with BC Housing and community partners to increase care options for people in their home communities.”

So far, construction is steady. The foundation is complete, and crews are now putting up walls. It is expected to be ready for move-in at the end of 2021.